Chalk up another championship for the Cartel. Cory Redmond rocked it and rode away with the 2012 United Federation of Dirt Women’s Marathon Championship!
Yeah, it’s kinda’ a big deal. 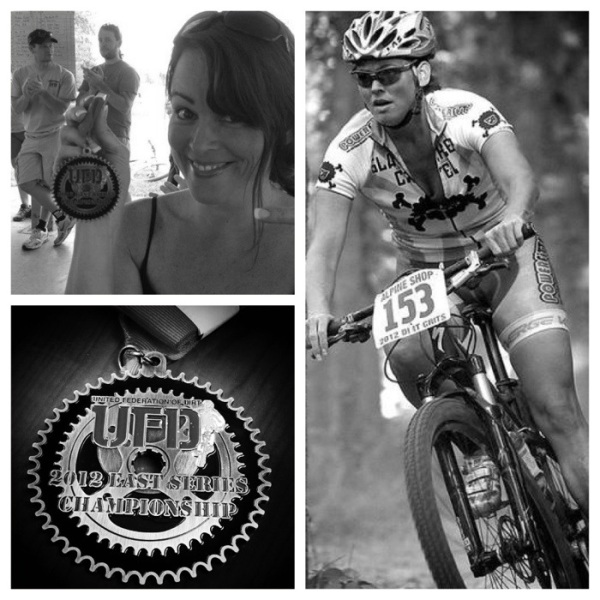 The new kits are in. We are going with a slightly different look this season. 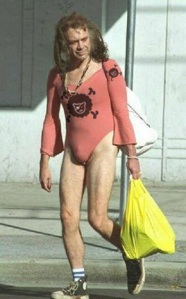 You think you hate it now, just wait ’til you wear it.

And where do you get pink fedoras?

I’ve had a less than stellar ‘cross season so far. I felt I was getting worse instead of getting better, not even a little bit better. I was seriously wondering why the hell I keep doing this to myself, $25 or more flushed down the drain every weekend. I finally came to and understanding with myself, I’m not worrying how well I do, I’m now trying to focus on the fun that I’m having rather than how miserable I feel while racing. Cross is miserable for everyone, gotta’ find the fun in it somewhere.

Boulevard Cup was the final race with the all the negativity floating around in my brain. Last week at Smithville Cyclocross Fest saw a more positive performance, and I did much better than the previous races. It was a fun and fast course, especially the beach section, the fastest line was actually in the water, go figure. 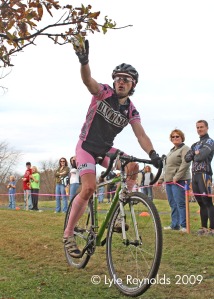 I actually wrote out a blog about it but it was just a woe as me essay and didn’t want to bore everyone with it so I didn’t post it. Nobody wants to read someone bitch and moan about how bad they are. You can thank me later.

I finally had my cx bike fit a few days ago, and it looks as if it was the best thing I’ve done since I started racing ‘cross several years ago. Has it really been 3 seasons? Who would have guessed that moving things a few millimeters up and down would make such a difference. The weather has been lousy the last few days and I didn’t have the chance to ride the bike and see if things got better.

I nearly missed the start of the Masters B race, when my left Egg Beater pedal broke, the spring just snapped while I was warming up. Oh shit!! Luckily Joe lent me the pedal off of his pit bike, we got it on just in time. I would have been screwed without it, lots of climbing and it would have been rough with only one shoe clipped in. That’s the second set of Egg Beaters I’ve broken, I’m that powerful!

The whistle sounded and I found myself near the front of the pack, not that big of a deal, I’ve been good at starts lately, my finishes are a different story. I was sitting in third or fourth for much longer than ever before, easily passing people and keeping them behind me, this never happens. Laps came and went and people I passed earlier were still behind me. Again, this NEVER happens. I ended up making a few bike handling issues and several were able to sneak past, but not as many as usual. I’m hoping the difference was in the bike, it might be a bit psychological too, but I’m not too worried about this. What ever it was it seems to have made a hugh difference. 9th place, not to bad.

As is the case with athletes who tend to be a bit superstitious I’m going to see what I can do to keep this new found ability around. I’ll be back in the 2008 State of California Championship skinsuit, same socks, same shoes (new shoes actually Mavic Razor), same pre-race meal… What ever it takes, look out for the California champ, if it ain’t broke don’t fix it. The California Champion skinsuit was found on ebay, after spotting one when I was in San Francisco in the spring. Yeah, I know I didn’t earn it, but it was a find that was too cool to pass up, $30 and was like new when I got it. Regardless, it made for a great Halloween race costume, plus a blond wig and a puka shell necklace. (hopefully someone has pictures and will be posted when found) All bets and norms are off when it comes to Halloween costumes. I was glad to see others raced in costumes too; there were roller girls, lots of tatts and fishnets, Clark Kent, several skeletons. I wish there were more, but it was better than nothing. It seems like the lower your classification the higher the odds you would see someone in a costume. I was the only one in the 3/4 race, and there were none in the open races. Lame! 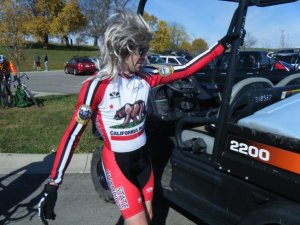 Speaking of superstions, I haven’t washed my bike or my pink Black Sheep kit since the season started. I’m not sure if this has helped or hurt my chances or if I’m just lazy. 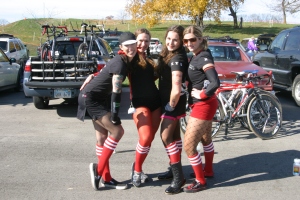 Speaking of the 3/4 race. I was feeling so good about my first race I felt that a second race was in order. I missed the window for the mens 4 race, so I signed up for the 3/4 race instead. I soon had a feeling that this was a really bad idea. That feeling turned out to be true as soon as the race began. I was in last place in seconds, and would be there for the next 45 minutes. After getting blown away at the start my hopes of anything good quickly disappeared, it became a personal challenge to see how I could do against guys who are much better than I am. I held off getting lapped for about half the race. By then I was hopping to get pulled, but each time I rolled past the officials they kept showing me the number of laps left. I’d yell something, but they kept showing me the lap board. I realized that they weren’t pulling me, despite how slow I was going but short of stopping they were going to make me finish. It was a small field and I wasn’t causing any traffic jams. I was in it for the duration, and I couldn’t bring myself to quit. I was positive I was getting a DFL but somehow finished 16th out of 18. I’m not sure how that happened, and I don’t care. I might revisit the 3/4 category in the future, but it will be some time before that happens, I’m sticking with the Masters B, maybe a Masters A here and there but it’s B races for now. 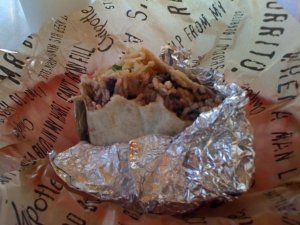 * I didn’t make it to Lawrence, I went out with friends, two robots actually Halloween night and didn’t make it home until quite late, even including the extra hour with the time change. Getting up early and driving all the way to Lawrence just didn’t sound like the thing to do this morning, catching up on some well needed sleep seemed to be the wise thing to do. There is plenty of racing to do this season and missing one race isn’t a big deal. The race next Saturday is at night under the lights at a race track, it sounds really fun! Then the Destad Cup continues Sunday and I’m working my way up the points list, so I’ll be there too.

Leavenworth, KS is a odd place, not only are lots of people in jail and nobody knows where anything

is. One would think a clerk at a connivence store would know the lay of the land and where the high school is. Nope, two different gas stations were clueless, turns out that a guy from South Dakota who was also in the BP station knew just where it was and how to get there.  Some streets have numbers some don’t, it makes no sence, maybe it’s to confuse anyone who breaks out of prison or guys looking for a cyclocross race.

Pre-registration allows you not only a swag bag of chamois butter and various flavors of energy gels but it also gets you called up to the front of the starting grid.  Thinking this might ease some of the terror that is the first minute of a cat 4 race I went ahead and paid my money early.  It made no difference, I wasn’t able to get out ahead of the mob far enough to miss the cluster f*#k that the first turn gives, as usual someone goes down and gets ran over several times.  Better him than me I’m thinking as I ride over his front wheel because there is no other place for me to go.  I felt I raced a good race, I beat a few guys I wanted to beat, a few beat me, actually many many people beat me.  There were a few dicey moments where gravity and poor bike handling skills by others caused me a few moments of finding myself tangled up in my frame sitting on the ground trying to figure out how I got there, but that is cyclocross.  You get back up and pedal as hard as you can to pass the idiot who decided to dismount halfway up an easy hill right in front of you.

Poor cycling skills were not the scariest part of the race, it was an odd turn off a gravel road and onto a concrete staircase that led up to a football field, disaster was lurking if you were not careful.  Concrete stairs are nothing new, they pop up all the time, it was the approach where the danger was posed. (The stairs were eliminated for the last few races to nobodies disappointment.)  Like every race this season mens 4 is the largest field by far and for some reason I find myself getting worse each week, today I was on the second page when standings were posted, not good.  I blame society.

Men’s Master B’s is usually my time to shine, I’ve been finishing in or near the top 10 all season long. Again I got a front row start which was a bit less terrifying than the 4’s race, no first turn wipeouts.  I managed to keep myself near the front of the pack for the first few laps.  As soon as I started to feel comfortable I somehow lost control of my finely tuned, demon free cyclocross machine and eat it hard, tearing open a scab on my knee from a previous race, always a nice touch.  To make things worse I loose my chain, normally not a big deal but I’ve recently installed a chain protector on the seat tube to keep my chain from coming off.  Somehow the chain got past it when I fell, I pulled and pulled trying to get the chain past the do-dad that normally keeps the chain from falling off.  As this is happening everyone I’ve kept behind me so far is now flying by me like mad, even the juniors on their tiny little bikes. (I’m pretty sure someone has it on video or at least photos) I finally get it on, I get on and find myself way behind everyone, expecting to get lapped at any minute.

Knowing my current spot in the series point standings was in jeopardy (6th before todays race) I had to defend my spot at all cost, I pedal my ass off making my way back up through the ranks passing people I haven’t seen since lap one.  I manage to catch my cycling nemesis, Eric from GP Velo Tek on the bell lap, small victories.  I’m currently unsure of how I did, we left before the standings were posted.  Adding insult to minor injuries, I was on the wrong end of someone’s snot rocket all down my left thigh, gross!

Men’s Masters B 35+  Funny moment at the end where I cut the tape.

Let’s hope the Black Sheep in Charlotte didn’t get snotted on too this weekend at NCCX race #5 in Sandhills Community College in Pinehurst, NC.  Go Team!