Some call it a velodrome, some call it grack (grass + track), I call it a hay field in Kansas where people ride in circles on bikes without brakes. Regardless of what you call it, it was the latest installment of the Kansas Track Championships. It’s run just like another track, just without the banked oval.

Anyway, the Cartel walked away with two second place finishes; age group 40-45 1 K time trial and the same age group Scratch race (8K mass start race). It’s too bad Chasm didn’t come, he would have been an official state champion in every race he entered, no one in his age group was there, strange. I on the other-hand do not qualify for jack shit since I live in Missouri. Oh well, no big deal, I’m not big on Kansas anyway. 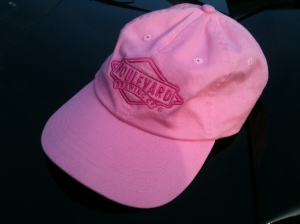 You get merchandise instead of medal if you’re an out of state resident.

Scratch Race (8K) Second and first place coming out of the second corner. 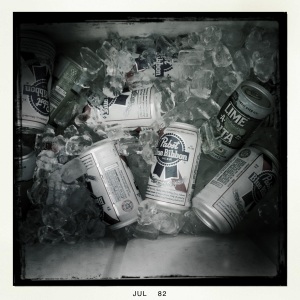 When one thinks of track racing they usually picture a grand oval constructed of wood or concrete with big banking curves. Not so quick, back in the day people often raced in circles on someone’s piece of land, no wood, no concrete, not a bank to be seen, just a big flat grass covered oval.  Fast forward and people are still kicking it old school, in a desolate hay field outside Lawrence KS, ladies and gentleman your 2011 Kansas track championships venue!

So, a year ago I won two state titles* I don’t live in Kansas (think god) so I’m technically not a state champion, stupid rules!  Regardless, I refer to myself as state champion anyway.  Don’t like it, too bad, come out and try to beat me.

I was bested in both categories I had last year; the one kilo time trial (men’s 35-39) and the 8 K mass start scratch race.  Why it’s called a scratch race I do not know. Anyhoo, I came home with two quasi titles.  Kansas City Metro champion, basically first place for people who live in Missouri. KC Metro Champion has a nice sound to it, I got two blue ribbons and and armful of prize schwag, so suck it Kansas!

I feel beat up, bruises on both fore arms from riding in the drops most of the time, my hands are beat to shit from such a bumpy track and my ass is as sore as it’s ever been, again thanks to the bumpy track.  I can’t imagine the pain without padded bike shorts.

The Cartel is sponsored by Pabst Blue Ribbon Beer who graciously gives us money, beer and other assorted stuff!!  Knowing it will be a hot day I bring with me our big blue PBR tent, and a shit ton of beer, free beer.  You would think people might be happy to see some free beer, but no. I get repeatedly shit on for bringing “low-brow, yard beer or worse, hipster beer”. You know who you are. 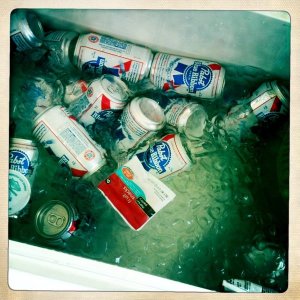 Free beer and fruit snacks for everyone but beer snobs!

Now I understand not everyone enjoys every beer, for example I don’t like Boulevard Tank 7 or any other Smokestack Series beers. I personally think it’s pretentious and is trying too hard to be something it’s not, I don’t care for its flavor and it doesn’t sit well with me.  I don’t sit around and bag on the people who brought a keg of Tank 7, I don’t call them pretentious beer snobs or anything like that.  I simply pass on theirs and crack open one of mine thank you very much. I wouldn’t call it my all time favorite brew, but it’s good, cold and perfect for the occasion and it’s FUCKING FREE!! 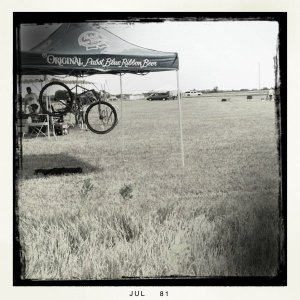 “You always have that shitty hipster beer, it’s terrible…” You want to know why we always have it? It’s because we have a great sponsor who goes above and beyond to keep our little pink clad cycling family happy.  News flash, it won’t turn you into a hipster if you drink it.  You don’t like it, don’t drink it, and shut your pretentious beer hole!

You know what, next time I bring any, I’m keeping it for the Cartel and anyone who wants one. So fuck you beer snobs! Drink your expensive beer you had to pay for yourself, this shitz was free!

Some days things are just not meant to be, last Saturday afternoon for one.  It was the Kansas State Grass Track Championships in Lawrence, yes grass track, all the fun of track racing without the velodrome. Imagine a large flat filed with an oval shaved into the grass.  They say it was very common back in the day, but so was black and white television and you don’t see it any more either.

As is the case with track racing both in a velodrome and out here in some guys field you must ride a track bike, makes since.  Anyway, track bikes are fixed, if the back wheel is turning so are the cranks, no freewheel and no breaks.  If I had some tight girls jeans and a messenger bag I could fit right in with the hipster crowd, but I live in a very hilly city and the idea of a track bike outside of a track seems stupid to me. I know many people think they are the bee’s knees and great for training, but I don’t, I really enjoy coasting and not killing my knees.  Give me a bike with gears and breaks and I’m happy, technology marches on.   Plus the closest velodrome is in St. Louis, a bit of a drive.

Back to the race, and disappointment shortly there after.  I finally won a race, two races actually.  I finished first, and we will leave it at that.  I won the Mens 35-39 1K time trial, and the Mens 35-39 scratch race.  And I have absoutly nothing to show for my victories.  I don’t live in Kansas, nor do I want to live in Kansas so I’m unable to claim the title, “State Champion”, nor do I receive any such medal for winning my races.  I did get a lovely r5 t-shirt, and a jar of taint lubrication. This feat of athletic prowess was accomplished on a borrowed bike, I don’t own a fixed gear bike.  And I’m sure as hell not going to St Louis for the Missouri track championships, I would get destroyed.  However, I’m keeping those “championships” even though they are not technically mine.  I’m happy putting an asterisk next to those victories, it always worked for Roger Maris. 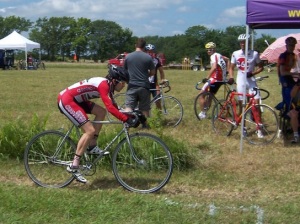 It’s not often that I win races, in fact I haven’t won a race since i was 5 when I destroyed the field at the Belton (MO), Community Days Big Wheel races, I even got my photo in the paper.  I finished with a medal at mountain bike race earlier this spring, and I don’t even own a mountain bike, a ‘cross bike did an admrialble job going up against everyone’s mountain bikes (faster and lighter is the way to go if conditions are right).  It’s funny that I keep doing well in cycling events that I rarely ever take part in.

It was hot, surface of the sun hot.  It was almost 100 F even hotter if you factor in the heat index.  And going with the long sleeve skinsuit was probably not the best idea, but fashion trumps comfort if you ask me.  Do it it’s tightness it did help hold ziplock bags of ice on your neck and back as you were busy killing yourself spinning laps around the track as hard as you possibly could.  Fighting the urge to coast was a problem as well but I stayed on without getting flipped off the bike, I guess it’s something you get used to riding fixed.

It wasn’t just me who were disappointed, winning a race and having nothing but taint lubrication to show for our victories.  I am taking steps to rectify this matter, I don’t want to go into detail right this minute, but those of us who won but lived out of state will soon have something to show for our efforts.  Check back later in the week to see what steps have been taken.

Karma soon took hold of the venue, as soon as medals were awarded (some to people who didn’t finish first but lived in state) a hugh storm blew in, forcing everyone to huddle under a tent while watching everything that wasn’t tied down get destroyed, sorry Boulevard team, your tent is toast. 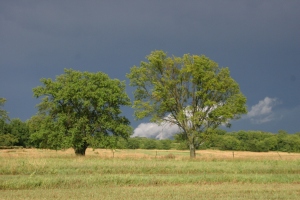 They saved the top of the tent, but the bottom is a goner.